Hello, this post is about the latest update on the reduction of ESI contribution rate for both employers and employees.

The Government of India has taken a historic decision to reduce the rate of contribution under the ESI Act from 6.5% to 4%(employers’ contribution being reduced from 4.75% to 3.25% and employees’ contribution being reduced from 1.75% to 0.75%). Reduced rates will be effective from 01.07.2019. This would benefit 3.6 crore employees and 12.85 lakh, employees.
The reduced rate of contribution will bring about a substantial relief to workers and it will facilitate further enrollment of workers under the ESI scheme and bring more and more workforce into the formal sector. Similarly, reduction in the share of contribution of employers will reduce the financial liability of the establishments leading to improved viability of these establishments. This shall also lead to enhanced Ease of Doing Business. It is also expected that the reduction in the rate of ESI contribution shall lead to improved compliance of law.
The Employees’ State Insurance Act 1948 (the ESI Act) provides for medical, cash, maternity, disability and dependent benefits to the Insured Persons under the Act. The ESI Act is administered by the Employees’ State Insurance Corporation (ESIC). Benefits provided under the ESI Act are funded by the contributions made by the employers and the employees.
Under the ESI Act, employers and employees, both contribute their shares respectively. The Government of India through the Ministry of Labour and Employment decides the rate of contribution under the ESI Act. Presently, the rate of contribution is fixed at 6.5% of the wages with employers’ share being 4.75% and employees’ share being 1.75%. This rate is in vogue since01.01.1997.
The Government of India in its pursuit of expanding the Social Security Coverage to more and more people started a programme of special registration of employers and employees from December, 2016 to June 2017 and also decided to extend the coverage of the scheme to all the districts in the country in a phased manner. The wage ceiling of coverage was also enhanced from Rs. 15,000/- per month to Rs. 21,000/- from 01.01.2017.
The Government of India is committed to the cause of welfare of employees as well as employers.
It is also committed to improve the quality of medical services & other benefits being provided under the ESI scheme.

Posted by Connect One Dynamic Synergies Pvt.Ltd at 23:50 No comments:

On The Occasion Of State Election Day


The notification further instructed employer to seek permission from concerned district authority in case of any emergency for not declaring holiday in the event of election and thereafter, employer in such emergency situation shall provide only two to three hours of paid-leave to all employees for exercising their right to vote.

1. According to the democratic pattern of our country, all citizens who were registered over 18 years It is up to 100 % to vote in the election. Taking into account this issue, the People's Representation and the Act, 1949

According to Rule 135 (b) of (Part-2), the voter is entitled to vote on the day of voting. Payment can be made to pay, or reasonable discounts on working hours at some locations. Give in. Some of my past choices have been that organizations, establishments, etc. Paid goodbye Or do not offer discounts. This leaves many voters disenfranchised, which very dangerous for democracy.

2. As per the order issued by the Election Commission of India in 288 Assembly constituencies in Maharashtra. The election will be held on 21st October 2019. All the voters in this election belong to them

The following orders are given to ensure that the voting right is done properly:

I) Workers /officials/employees who are voting in the polling area for election. Everyone who is outside of the general election area shall be entitled to vote on the day of the election.
Payment should be made to pay.

III) Exceptionally, in the case of workers, officers, employees, etc., the full day will not be paid. So, workers in the polling area have only two to three hours instead of free time to vote. Can be discounted. Regarding the matter, he had earlier informed the concerned district officials and district election officials. Permission will be required. In any case, voters need at least two to three hours to vote Establishment owners will be required to take account of the receipt of compensation.

IV) All establishments, factories, industries, industries, industries and labor as mentioned above Shops, etc. Remember that the above instructions are strictly adhered to by the owners/management Be careful. Voters vote not to receive the appropriate discount or exemption for voting In case of failure to arrive, appropriate action will be taken.
Posted by Connect One Dynamic Synergies Pvt.Ltd at 00:35 1 comment: 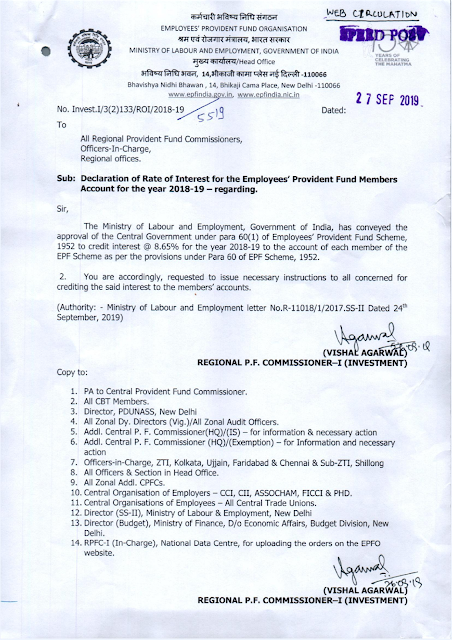 Ø  The Labour Ministry has notified 8.65 per cent interest rate on employees provident fund for 2018-19, which will now be credited to the accounts of more than 6 crore subscribers of retirement fund body EPFO, Union minister Santosh Gangwar said on Tuesday.

Ø"It gives me immense pleasure that for fiscal 2018-19, Labour Ministry has notified 8.65 per cent rate of interest on employees' provident fund (EPF). This rate of interest is 10 basis points higher than 8.55 per cent provided in 2017-18," Gangwar said in a statement issues here.

Ø"This rate of interest (8.65 per cent) was approved by the EPFO's apex decision making body Central Board of Trustees on February 22, 2019. We received concurrence of the Finance Ministry on September 19, 2019. Thereafter, Labour Ministry issued a notification for providing 8.65 per cent rate of interest for 2018-19," the minister said.

ØThe minister also informed that this decision would pave the way for crediting Rs 54,000 crore as 8.65 per cent interest for 2018-19, into the accounts of more than 6 crore EPFO subscribers.

Posted by Connect One Dynamic Synergies Pvt.Ltd at 23:17 No comments:


As per EPF scheme rules, once you get married the previous nomination made by you automatically becomes invalid in your PF and EPS account.

Saraswathi Kasturirangan, Partner, Deloitte India says, "The nomination in EPF and EPS made prior to marriage automatically stands cancelled after marriage. As per the rules of the EPF scheme, an EPFO member is required to do fresh nomination after marriage."

As per the EPF Act, only defined family members can be nominated in an EPF account. Ms. Kasturirangan says, "Under the EPF Act- (i) in the case of a male member ''family'' means his wife, his children (whether married or unmarried), his dependent parents and his deceased son's widow and children and

ii) In the case of a female member, "family" means - her husband, her children (whether married or unmarried), her dependant parents, her husband's dependent parents and her deceased son's widow and children."


However, the rules of nomination for EPF and EPS are different. Gupta says, "Family, in respect of whom nomination may be made, is defined differently for the purpose of Provident Fund Scheme and Pension Scheme. In the case of EPF, a member has an option to nominate even his/her parents, apart from spouse and children. However, in the case of EPS, a member can nominate only his spouse and children."

Gupta says, "After marriage, you can still nominate your parents (irrespective of your gender) or any other family member as defined in the law in your EPF account. However, for your pension scheme account, you can only nominate your spouse and children after your marriage."


Posted by Connect One Dynamic Synergies Pvt.Ltd at 05:21 No comments:

Posted by Connect One Dynamic Synergies Pvt.Ltd at 01:12 No comments:

The Company is headquartered at Bangalore and extends its services to cater to the needs of its clientele on PAN INDIA basis.  We are a professionally managed company backed by a team of highly qualified and dedicated professionals willing to serve at a scintillating speed for deliverables within the accepted turnaround time.   Non-Disclosure, Non-Compete and maintaining confidentiality of customer information is an unwritten commitment and is of paramount importance to us.

The company’s one other specialized Key Area is organizing mandatory and statutory licenses from all Government Agencies for a New Entrepreneur Company to complete its new Project and to start its commencement of business and commencement of production.    To elaborate, we ensure getting Licenses/No Objection Certificate/Consent Letters from Authorities viz., Pollution Control Board/Department of Factories, Boilers, Industrial Safety & Health, Department of Fire, Karnataka Industrial Areas Development Board, Department of Labour, PF/ESI/Professional Tax, Airport Authority of India, Karnataka Ground Water Authority and such other authorities as may be required under the provisions of various Statutes for commencement of new Project/Company.   In a nut-shell, we will be able to provide you any and all your statutory requirements under a SINGLE ROOF, which will not only help the company to get its approvals in the shortest possible time but also help in reduction of  time, energy and cost.

For small timers and start-ups, our other core area of service is its expertise and include organizing Licenses from various Statutory Authorities viz., Department of Factories for Factory Licenses, Department of Labour for Licenses under Shops & Establishments, Civic Agencies -  for Trade License,  Provident Fund, ESI and Professional Tax Registrations and compliance.   The company do provide the entrepreneurs with extension of additional services in organizing requirements, such as, Registration of Digital Signature, MSME Registration and Registration of Companies with the Registrar of Companies, GST Registration, PAN requirements etc., besides providing end-to-end HR Services.

We understand that while getting the right services, at right time, in a right way is everyone’s delight, cost of the service also matters most.We provide our services at an affordable and amicable cost acceptable to both.

Posted by Connect One Dynamic Synergies Pvt.Ltd at 04:59 No comments: